On a warm autumn evening another frog went down. This one less than an inch in length, green with black spots; nothing unusual, long muscular legs and toes for its torso, hopping along the same sidewalk that all the other victims had before falling victim to frog predators.

The frog hopped along as it dodged dozens of feet rushing back to where they lived in the rush hour traffic. One prisoner stopped to direct traffic around the frog to protect it from harm, and then the frog nappers moved in to take control of the situation. One tall with close-cropped blonde hair and aqua-blue eyes; the other more squat with more sinister features, brown hair, beady brown eyes, and ruddy cheeks; both on the high-end of middle age, that is, if you consider the fifties to be in that category. Okay, maybe to some they’d be more along the ancient-line of ages, either way, though, old they may be, but slow they were not. They snatched the slippery frog off the sidewalk and ran with it. Well, not in that exact manner. This is how it went down on the prison walkway in front of the education, chapel, and psychology areas.

The frog napper had an accomplice this time. He usually works alone. The shorter of the two reached for the frog as it hopped toward a grassy area in an attempt to escape its abductor. The tiny arboreal amphibian dodge the snatch of that napper and then reversed its direction, only to fall into the hands of the taller of the two perps, who chased the little creature across the sidewalk until he cupped it under his palm, before grabbing it between two fingers. The small frog kicked and squirmed as it tried to escape. The cool and slippery skin failed to aid the escape plan when the defenseless frog couldn’t slip through the grasp of the abductor, who then turned his catch over to Frog-Napper-Frye, a man with a history of napping little frogs. 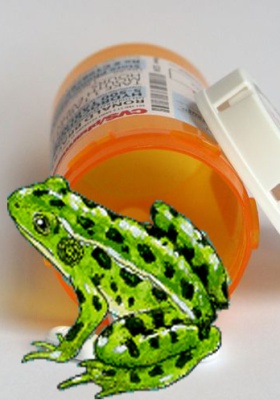 e I saw the tiny creature, it sat inside a small, orange pill bottle with a white cap on; the bottle, not the frog. Frog-Napper-Frye headed south with the napped frog in tow. He mentioned putting it in the pen with another frog he’s had for one-year.

“I’ll let this one go if it doesn’t get along with Shorty Morgan,” he said.

Shorty Morgan is another frog that he affectionately named, which he goes to great extremes to keep fed, year-round, with a variety of insects he captures inside pill bottles. One day Frog-Napper-Frye reported that he returned to the cell to find Shorty Morgan floating on a piece of paper that hadn’t flushed down the toilet bowl. A federal agent had zoomed in and discovered Shorty Morgan sitting inside his custom-designed pen, all bug-eyed looking, and then the bitter agent attempted to rid society of another dangerous felon by sending it down the river for life. Fortunate for Shorty Morgan, the villainous federal agent failed to wait and see if he survived the flush. Shorty Morgan must have tricked him by swimming back up into the toilet bowl, after being dragged down by the current, deep down into the plumbing pipes, before resurfacing once the coast was clear. Read more about Shorty Morgan on the murderslim.com blogspot I referenced in my June 16, 2015, blog post (“#Nature – Frogs, an Octopus, and #Escapees”).

Local law enforcement officials may have put an all-points-bulletin out to arrest Frog-Napper-Frye. The night of the abduction was the last time I saw him. I’ve heard he’s in federal custody. If they did catch up with him, he’ll probably get another five-to-ten for abduction of frogs, in violation of the federal code for the Amphibian Safety Act.

I confess. I was the accomplice in the frog-napping crime on the sidewalk. I found myself torn between loyalty to my friend with a thirst for frogs, and my desire to let the tiny creature go free after relocating it to safety, as I would have normally done. Loyalty to my friend won. It did make me feel better when he said he might let the new frog go free. Maybe he did. One day I hope to learn what happened to him and the frog he nabbed on that warm autumn evening.

Please follow my blogs and visit the website at http://www.straightfromthepen.com for more of my writings, and to purchase my books, essays and short stories. Thank you. Contact Midnight Express Books, P.O. Box 69, Berryville, AR 72616; e-mail: MEBooks1@yahoo.com), if you prefer not to order online.