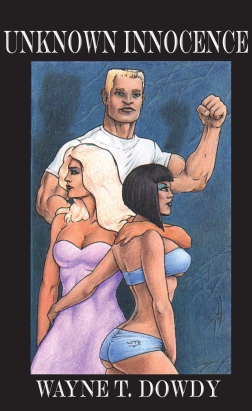 UNKNOWN INNOCENCE contains a variety of characters with various traits and characteristics. When I wrote UNDER PRESSURE by Mr. D, now at the core of UNKNOWN INNOCENCE, I needed to create a character everyone would hate so that when Karma delivered its blow, the reader would rejoice or feel he got what he deserved. I thought of two degenerate, despicable, sick and evil serial killers, executed for their repulsive crimes: Ted Bundy, a necrophiliac (performed sex on deceased victims); and John Wayne Gacey, who raped, tortured, and murdered children before burying them under his house.

What constitutes a despicable character varies from person-to-person, of course. Some despise drug dealers, others a drug addict or alcoholic, a skid row bum begging for change to buy a fifth of wine or bag of dope to feed the gorilla robbing him or her of life; people who harm animals, thieves, sex offenders, and other criminals who commit horrendous crimes. I concluded that the most likely despised are those who harm children and the elderly. Most all societies despise anyone who physically or sexually abuse children and the elderly. To fill the bill, I created Jake Stephens, based on acts similar to those performed by Bundy and Gacey.

The following is an excerpt from UNKNOWN INNOCENCE, chapter 25 of 39, titled JAKE.* Thousands of you may have read the scene as part of UNDER PRESSURE, so you will know I censored the beginning where Jake committed a horrendous crime, and then helped his brother search where he knew she would not be found by search parties. I will begin with my pick for the most repulsive scene that shows a real despicable character. If you are not one who knows what happened before this part, you must read the book for the rest of the story.**

“He had her stashed in the bushes three counties away. At night he’d go back to her until the stench of rotting flesh kept him from having her again. Then he buried her in a shallow grave and went on to find four more victims during the next five-months, before law enforcement officials sent him to prison on an unrelated charge.

He sat in his truck and watched an older lady get out of a van to let her terrier go for a walk on a nature trail in the Blue Ridge Mountains, near one of the Civil War battle grounds. For the last half hour, he had sat smoking cigarettes and nursing a beer while he waited for someone to pull into the roadside park.

“Here comes one,” he mumbled, when he saw her slow to pull off the main road.

After she had stopped and sat for a moment, she glanced his way. He averted his gaze to look at the dashboard. She opened the door and climbed out with the small terrier in her arms.

Nice legs. I hope she doesn’t get spooked. Clothes look expensive. New van. Maybe she’s got some diamonds or gold. I might have some fun with her, even though she is older than I like. Come on granny. There you go. Go on down that trail.

He checked for traffic on the winding road leading to the site. Satisfied no one else was coming, he opened the door, took a deep breath of mountain air, and then followed her into the woods.

“Shh! Fee Fee. That nice man’s not going to bother us.”

He saw her watching him coming down the trail, his hands in his pockets. “Hey, how you doing, young lady?” he said. He wanted to get closer to make his move. The dog continued to bark.

“Shh! Fee Fee, I told you he was nice,” she said, and then brushed away a wisp of gray hair from her aged face. Her lips were upturned, her face a rosy read; flattered by his compliment. Fee Fee kept barking. “I’m doing well,” she said. “Just trying to stretch my legs and let my baby relieve himself.” She bent down toward Fee Fee. “Hush, now. Momma’s fine,” Then she turned toward Jake, who was ten feet away. “This is my personal protector,” she said, and then giggled.

“Ha, Ha, Ha,” he said. I’ve got this bitch now, he thought. That dog’s getting on my nerves. I can’t wait to break its little neck. “Those are nice to have around. I have a Yorkshire,” he lied. He removed his hands from his pockets.

“Are you from around here?” she asked, then stepped farther away from him.

He kicked some leaves; his face slick with sweat, adrenaline flooding his veins. “No, I’m from somewhere else.” That dog is going to get more than he wants. “Where you from?” He shifted his eyes, checked the parking area, reached into his back pocket as he moved closer to her.

“Florida. I came to see this National Park.” She turned away and slid her left thumb under the front of her brassiere strap.

He yanked a hawk-bill knife from his back pocket. “Give me all your money and jewelry, old lady, and there won’t be any trouble. I’ll slice you and that mutt into pieces if you don’t.”

She pressed a micro switch in the lining of her bra to activate the alarm, and then slid a small pistol from under her left breast. Two federal agents burst from the back of the van, guns drawn. Both agents dashed down the embankment with their pistols aimed and ready. The larger of the two shouted, “Drop the weapon. Get on the ground!”

When she heard her backup, Agent Loraina spun around and dropped to a crouch, aimed the gun at his puny chest. “Drop the weapon or I’ll shoot!”

He dropped the knife. “What the fuck is going on?” he said. Then he lay in the leaves; shook his scraggly hair from his face.

“A sting operation,” she said. “We’ve been after you for months for a string of robberies on a federal reservation.”

Fee Fee pranced around him, barking.

“Good job, Loraina,” the case agent said. “You, too, Fee Fee.” He looked at him on the ground and laughed. Then he swatted at a mosquito and said, “Put the cuffs on him and let’s get out of this mosquito den.”

Four months later, he pled guilty to the armed robberies on a federal reservation.

Justice for Marsha and the other little girls, delayed. A year later, the federal marshals escorted him to the federal penitentiary in Leavenworth, Kansas.” [That concludes the excerpt.]

To create a good character, I made Jake display positive characteristics for the environment in which he lived, as I believe all of us have good and bad traits. Some of his good characteristics in the prison setting may not be viewed as good by some in the free society, but a writer must make their characters fit the plot to make the story believable; especially, since most fiction contains a lot of truth. I wrote Jake’s conclusion in “Karma.” He pays a high-price for his evil, wicked ways. Karma deals him a losing hand. All of my characters possess real traits that make them real, not incredible. I enjoy reading what I can believe. I write the same way. I hope you enjoy my writings and will continue to buy more.

Please send any comments to waynedowdy@straightfromthepen.com. Thank you.

** The original UNDER PRESSURE by Mr. D. is available from Amazon.com or your favorite bookstore for $6.50 (USD). Both personal magazines (UNDER PRESSURE-MOTIVATIONAL VERSION, and ESSAYS & MORE STRAIGHT FROM THE PEN) are now available for $8.95 each (USD). EBooks available as Reader Sets Price from Smashwords.com, $4.95 elsewhere (https://www.smashwords.com/profile/view/WayneMrDowdy). All books may be purchased through the website at StraightFromthePen.com (http://www.straightfromthepen.com). Expect UNKNOWN INNOCENCE before March of 2016.